Today’s writing tip: Don’t sit around waiting for the world’s best and newest idea for a story — just write it well.

Gwenpool was never supposed to be a real comic book. It was a joke cover, a mashup of Deadpool (the “merc with a mouth”) and Gwen Stacy (Spider-Man’s long-ago girlfriend who died tragically). 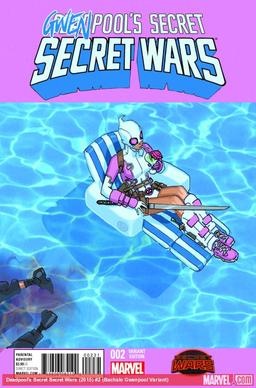 But the idea caught on — maybe because the combination was so silly — and people began dressing up as Gwenpool at conventions and demanding an actual Gwenpool comic. So, there was a reason to produce a comic, but there was no real idea for the comic — just the goofy image (right, courtesy of Wikipedia).

Supply followed demand and we got the comic book Gwenpool, starring Gwen Poole (not actually a Gwen Stacy after all), a regular girl who is a fanatical comic book fan, in a world like ours where there are no actual superheroes. And then she finds herself in the Marvel universe, where all the superheroes live, and she decides to become a superhero, despite her complete lack of skills or powers (and with not much respect for human life, since she thinks the people around her are all just comic book characters — which they are, of course, from our perspective).

But she does have powers, of a sort. She knows all the secrets of all the heroes, since she reads their adventures every month. And she understands how comic book stories work, the tropes she can use to her advantage.

And later, she develops a real power: the ability to move around in between the panels and pages of her book itself, in whatever direction she wants.

Which means she can also step outside the panels entirely and see the pages ahead of her, and so she knows when her book has been cancelled because she can see that the pages end. So, while we feel bad that the supporting characters which were invented for the book may never be seen again, Gwen is upset by this even more than we are because those people have become her friends.

This whole thing should never have worked, at least not for 25 issues, but it did. And the extent that it was because of the writing (and the art) is shown by the fact that whenever Gwenpool showed up in other books, written by other writers, she was always terrible. A very annoying and self-involved sociopath, basically. Which she sort of was a lot of the time in her own book, too, but there we could see why and what she was trying to do (and, being comic book fans, imagine ourselves in her situation).

A joke idea, never intended to be a real book, saved, month after month, by really good and inventive writing (by Christopher Hastings) and art (by Gurihiru).

Just to illustrate how complicated comic books are these days — all the things that are trimmed and simplified in the movies:

1) Spider-Man: Peter Parker. Bitten by a radioactive spider. Gets spider powers. (There have also been other Spider-Man characters at different times, but I’m trying to keep this manageable.)

2) Spider-Woman: Jessica Drew. No relation to Spider-Man — different origin and different powers. (May have been created in order to copyright the name — so some other company wouldn’t get there first. There have also been other Spider-Woman characters at different times.)

3) Gwen Stacy: Spider-Man’s girlfriend. Died tragically — I think a bridge was involved (I was never a big Spider-Man fan.).

4) Spider-Gwen: A Gwen Stacy in another dimension (like parallel time in Dark Shadows, or the famous Star Trek episode where Spock has a beard). She gets bitten by the radioactive spider, instead of Peter Parker, so she gets the spider powers and becomes Spider-Woman, but her book can’t be called “Spider-Woman” because there already is one (see #2 above), so her book is called “Spider-Gwen.” She does become friends with the other Spider-Woman, though, and another woman called Silk, who also has spider powers, though I forget the details.

Spider-Gwen is very popular, leading to the various Gwen Stacy mashup covers, including Gwenpool (see above).

This entry was posted in Comic Books, writing. Bookmark the permalink.

Notify me of followup comments via e-mail. You can also subscribe without commenting.